The filtfilt function in R is supposedly based on the Matlab one, but it does quite badly on endpoints. My goal here is to explore alternatives, with a focus on the Octave method.

NOTE: I may also try scipy for hints.)

The best method of dealing with endpoints is still an open question. Matlab does one thing, Octave does another. Both seem to work reasonably well, and the Octave license is more appropriate to the present task, so I am focussing on that.

This is a page in progress. I am trying to make some of my R code work exactly as Octave does, since then I’ll know that I’ve successfully mimicked their method. This is proving to be difficult! I started this page weeks ago and have returned to it several times. If/when I figure it out, I will update the date of the blog posting and remove the “draft” designation.

If any readers have ideas, please let me know! 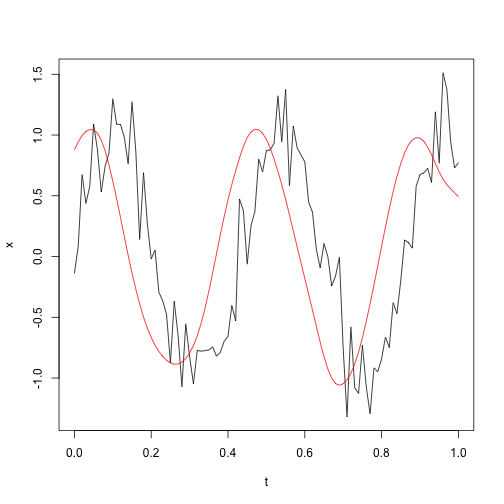 Comparison between R and octave output

The test codes a.m and a.R are the basis for the above.

Some R values (and comparisons with octave output) are given below.

Since v was ok before the filter, and wrong after, the problem seems to be in filter().

Finding the problem may be arduous, since (a) the R function stats::filter() is not well documented, regarding init, init.x and init.y, and (b) the Octave filter() spans 700 lines of C, so it is hard to reverse engineer to figure out what it’s doing.

I’ll start by assuming that this is trying to mimic the Matlab function of the same name, although the 4th arg is called si in Octave and zi in Matlab, so some caution is warranted.

The docs on the matlab version are here