Next Previous
updating oce::magneticField()
Mar 3, 2020 oce · R
This note sketches the procedure used to update `magneticField()` in the `oce` package, to use the updated formulae released by the International Association of Geomagnetism and Aeronomy (IAGA) in late 2019.

The formulae are provided in a standalone Fortran program (Ref. 2) and this must manipulated to get it into a form that can be used by oce. This posting outlines the procedure for that manipulation. It was written as I was updating from IAGA version 12 to version 13, but the similarity of the Fortran code in those two versions may suggest that these notes may be helpful for a future update.

The steps are as follows. But, before proceeding, the reader is cautioned that these instructions are for the developers, or for others who are comfortable programming in Fortran and are aware of its evolution over the past 60 years, for the code has remnants that go back to 1960s style of coding.

631 | fn = n | Warning: ‘fn’ may be used uninitialized in this function [-Wmaybe-uninitialized]

We must remove all code that writes messages to the terminal output. There is a way to do that in C, so I suspect there is a way also in Fortran, but I cannot be bothered to look that up, and instead I will just comment all those lines out. (I am commenting them out instead of deleting them because if bugs arise, we might want to reinvigorate these lines.) Commit note: " remove fortran warnings, comment-out write()"

This ought to be the end of the coding. Now, clean and rebuild the whole thing. If it fails, you’ll want to find out why, before proceeding. Once you have it all working, check that the test suite still works. Unless the modifications to the Fortran code (i.e. the underlying formulae) have been minor, it seems likely that the test suite will fail. So, your next task will be to figure out why, and to both fix the existing broken tests and create new tests that exercise the newly-added code.

Once you think you’re all done, please look at the help for the function, and ensure that it is still relevant.

The tests shown by ?magneticField produce some useful graphs, which are reproduced below.

World map of declination in year 2000. 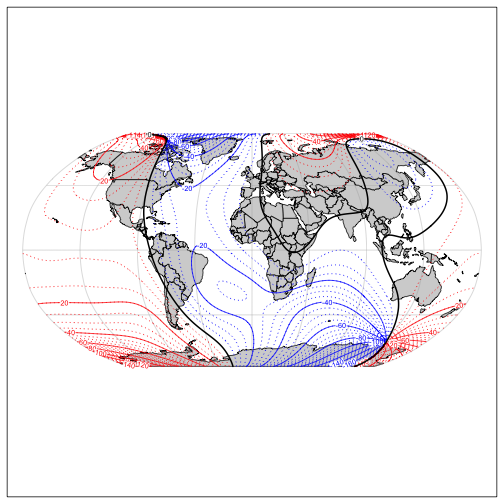 Declination differences between versions 12 and 13 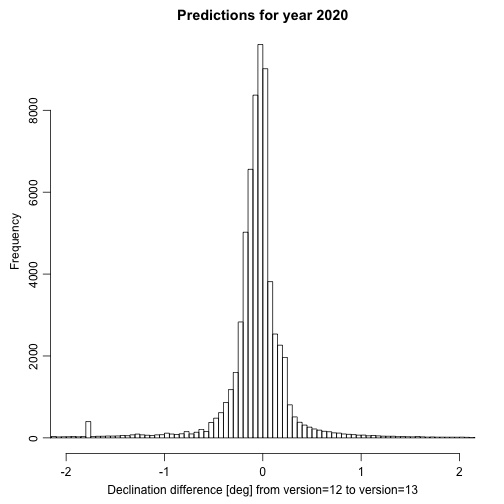 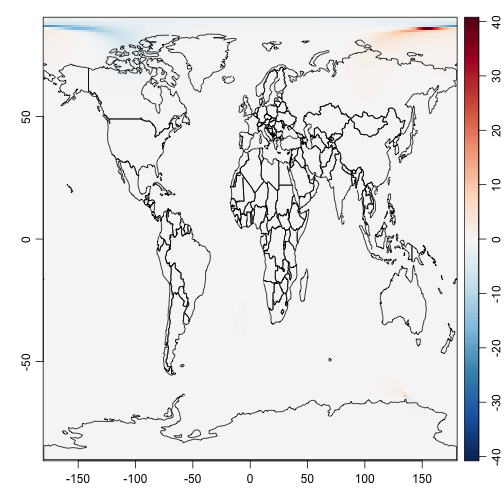