Today there was a solar eclipse that was not visible on my side of the Atlantic, but was seen on the European side, either as a partial eclipse, towards the south, or a total one, towards the north [1]. Eclipses being rare and solar power being a new thing, this event caused unprecedented reduction of solar power [2].

A good spot for viewing the total eclipse was Longyearbyen, on Svalbard, and readers seeking good images might want to include that name in web searches. (I could not find open-source images at the time of writing, but of course that was not really my goal in this blog posting…)

I thought it might be interesting to see whether the sun and moon functions in the oce package could reproduce the eclipse timing, so I constructed a function to measure the mismatch between sun and moon position in the sky, and set up an optimization problem to find the time of least mismatch.

The oce functions sunAngle() and moonAngle() are at the heart of the work. Each returns a list that contains, among other things, altitude and azimuth. I set up a mismatch function to calculate a combination of these, with a scale factor (line 11 of the code) to account for a sort of converging-meridian effect of azimuth. This function is unity at the horizon, where a degree change in azimuth is the same angular distance as a degree change of altitude, and it falls to 0 at the zenith. 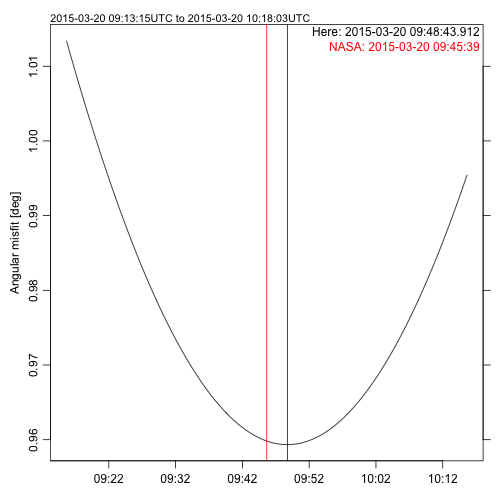 I’m not too sure why this is, so I’ve put some thoughts in the exercises.