R provides functions for both one-dimensional and multi-dimensional optimization. The second topic is much more complicated than the former (see e.g. Nocedal 1999) and will be left for another day.

A convenient function for 1D optimization is optimize(), also known as optimise(). Its first argument is a function whose minimum (or maximum) is sought, and the second is a two-element vector giving the range of values of the independent variable to be searched. (See ?optimize for more.)

As an example, consider the phase speed of deep gravity-capillary waves, which is given by $\omega/k$ where $\omega$ is the frequency and $k$ is the wavenumber, and the two are bound together with the dispersion relationship $\omega^2=gk+\sigma k^3/\rho$, where $g$ is the acceleration due to gravity, $\sigma$ is the surface tension parameter (0.074 N/m for an air-water interface) and $\rho$ is the water density (1000 kg/m^3 for fresh water). This yields wave speed given by the following R function.

It makes sense to plot a function to be optimized, if only to check that it has been coded correctly, so that is the next step. Readers who are familiar with gravity-capillary waves may know that the speed is minimum at wavelengths of about 2 cm, or wavenumbers of approximately $2\pi/0.02=300$; this suggests an x range for the plot. 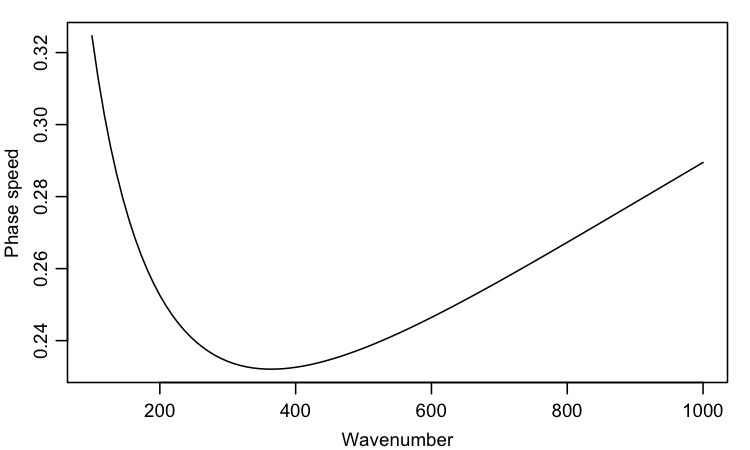 The results suggest that the range of $k$ illustrate contains the minimum, so we provide that to optimize().

This speed is not especially fast; it would take about a heartbeat to move past your hand.